Amblyopia, also known as “lazy eye,” is a common visual disorder in which a person has poor vision in one eye due to an asymmetry in the quality of visual input from the two eyes. The poor vision – which can range from slightly degraded vision to almost complete blindness- cannot be fixed with corrective lenses because the deficit induces changes in the vision centers of the brain. Typically amblyopia develops during early childhood as a result of the brain forming a poor connection to one eye. In toddlers and young children, amblyopia has been traditionally treated by covering the good eye with a patch and forcing the brain to improve how it works with the bad eye. As children age, however, the brain becomes less malleable making patching a less viable treatment option. As a result, amblyopia is nearly impossible to treat in older children and adults using this conventional method. Vision Therapy can be an effective treatment for both children and adults with lazy eye.

Most cases of amblyopia generally starts between infancy to 5 years old. Often, these children appear to be asymptomatic because they are too young to express or unaware of a vision problem. Other signs of amblyopia include delay in gross motor coordination, poor depth perception, and poor academic performance. The key to detecting refractive amblyopia is prevention. Yearly eye examination starting at 6 months by a trained eye care professional is recommended.

There are two key types of amblyopia. The cause of ‘Refractive Amblyopia’ is a significant difference in the refractive errors (nearsightedness, farsightedness and/or astigmatism) in the two eyes. ‘Strabismic Amblyopia’ is caused by a constant misalignment of the eyes. It’s important to correct amblyopia as early as possible, before the brain ignores vision in the affected eye.

NEW! Recent ophthalmology research recognizes that patching alone is NOT enough for the treatment of lazy eye. According to Dr. Hess from the Department of Ophthalmology at McGill University, “the current approach to the treatment of amblyopia [using an eye patch alone] is problematic…. it promotes recovery of monocular vision but because it is not designed to promote binocularity, its binocular outcomes [the ability to gain depth perception] often are disappointing.” Dr. Hess uses a video game that forces the two eyes to work together. This achieve not only better eyesight in the weaker eye, but also the development of depth perception which is necessary certain jobs, driving and sports. In fact, developmental optometrists have been practicing this binocular training concept for many years. At our clinic, we have this 3D video-game technology to help patients with lazy eye achieve faster and better outcome.

In cases when the amblyopia is caused by a large eye turn, strabismus (eye muscle) surgery may be required to straighten the eyes. Depending on the size, direction and frequency of the eye turn, some patients may benefit from vision therapy pre- and/or post-surgery.

Lazy eye will not go away on its own, and untreated amblyopia can lead to permanent visual problems and poor depth perception. If your child has amblyopia and the stronger eye develops disease or is injured later in life, the result will be poor vision through the amblyopic eye. To prevent this and to give your child the best vision possible, amblyopia should be treated early on.

Schedule An Appointment
Patient Forms
Email Us
Read Our Reviews 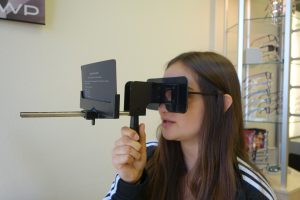