What is traumatic brain injury?

Traumatic brain injury (TBI) is defined as any damage or alteration to brain function due to external physical force. TBIs can be caused by falls, motor vehicle accidents, assaults, concussions, gun shots, or explosions and blasts etc. There are three levels of TBI: mild, moderate and severe. About 80-90% of TBIs fall in the mild category, which is most responsive to vision therapy and rehabilitation.

Vision is the most important source of sensory information. Often, vision problems resulting from Traumatic Brain Injury are overlooked during the initial phase of testing and treatment. Frequently, these problems are hidden and neglected. Because of the close relationship between vision and the brain, TBI’s can disrupt visual processing, interrupting the flow of information to and from the brain.

Over 50% of brain pathways relate to visual function, which explains why many patients with TBI may experience one or more of the following vision problems.

Symptoms indicating a vision problem are most commonly experienced as:

Neuro-Visual Rehabilitation is an individualized treatment program for patients of all ages, diagnosed with visual deficits as a direct result of physical disabilities, traumatic and / or acquired brain injuries. This includes visual problems caused by Traumatic Brain Injury, Cerebrovascular Accidents, Cerebral Palsy and Multiple Sclerosis.

Very few in the health care professions, including head trauma rehabilitation centers, are adequately aware of visual problems resulting from Traumatic Brain Injury and the visual-perception consequences. Unfortunately, this creates a gap in rehabilitative services, resulting in incomplete treatment and frustration for the patient, family and treatment team.

The vision care professional can play an important role in the rehabilitation effort. Through optometric vision therapy and the proper use of lenses, a developmental optometrist is specifically trained to work with Traumatic Brain Injury patients.

Schedule An Appointment
Patient Forms
Email Us
Read Our Reviews 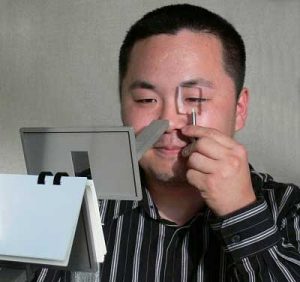